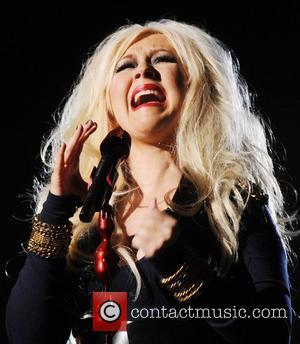 Christina Aguilera caused a stir during her visit to the UK for the Michael Jackson tribute concert in Cardiff on Saturday (8th October 2011). Debuting a fuller figure that took some fans by surprise, the singer performed in front of 40,000 concertgoers before racking up a huge bill at her luxury city hotel.
According to the Sun newspaper, Aguilera's bodyguards demanded a room at the St David's Hotel in Cardiff be cleared for her and her entourage. After several tables had been moved to accommodate the singer, the gang ran up a $10,000 bill for alcohol. Earlier in the day, the 30-year-old has spent around $12,000 to reserve half a first class train carriage from London's Paddington Station to Cardiff Central. A rider provided on the journey included vodka and 'cloned apples'. At the Jackson concert, Aguilera performed in a one-piece corset, belting out the Charlie Chaplin composed 'Smile', as well as Jackson's 'Dirty Diana'. Elsewhere, American singer Cee-Lo Green and British songstress Leona Lewis wowed the crowd with a selection of hits, while Jamie Foxx entertained with a rendition of 'Rock with You'. Perhaps the biggest applause of the evening came for UK band JLS, who performed 'Blame it on the Boogie', with the Jackson family.
American singer Jennifer Hudson and hip-hop ground Black Eyed Peas were slated to appear at the concert, but dropped out for unspecified reasons.