Stevie Wonder and Christina Aguilera were among stars who paid their respects to Etta James at her funeral on Saturday (28.01.12). 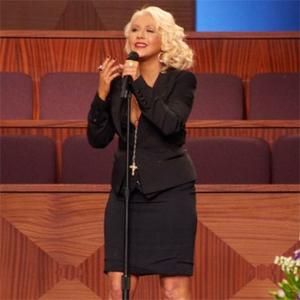 Christina Aguilera and Stevie Wonder were among the stars who paid their respects at Etta James' funeral on Saturday (28.01.12).

Christina performed the legendary jazz singer's trademark song 'At Last' at the service, which was held at the City of Refuge Church in Gardena, California, while Stevie sang a rendition of 'Shelter in The Rain', accompanied by a church choir and 'The Lord's Prayer'.

Introducing her song, Christina told the crowd: "There's a line in this song that says 'I found a dream that I could speak to.' And for me that dream, all my life, has been Etta James."

Etta passed away aged 73 on January 20 after battling leukaemia and other ailments, including dementia.

Her casket was on display at the funeral, surrounded by wreaths and floral arrangements and pictures of her.

Civil rights activist Reverend Al Sharpton, who had known Etta for many years, gave a speech paying tribute to her rise from poverty and her role in breaking down racial barriers.

He said: "She was able to get us on the same rhythms and humming the same ballads and understanding each other's melodies way before we could even use the same hotels.

"Etta will be remembered for her legendary voice and her contributions to our nation's musical heritage.

"I know she will be sorely missed by all those who knew and loved her."

Sales of Etta's records have reportedly increased by a huge 378 percent since her death.