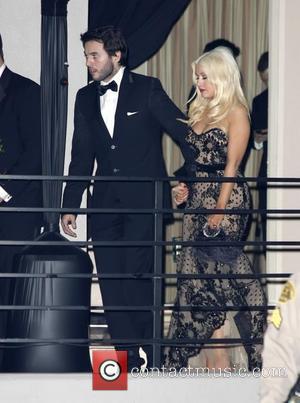 Christina Aguilera performed a flawless rendition of the National Anthem during rehearsals for the Super Bowl.
CHRISTINA AGUILERA, who sang the incorrect lyrics to 'The Star Spangled Banner' before Sunday's Sunday Bowl, performed a near perfect version in rehearsals, reports TMZ.com.During her performance in front of the 103,000 sell-out crowd at the Cowboys Stadium, Aguilera sang, "What so proudly we watched at the twilight's last reaming" instead of the correct lyric, "O'er the ramparts we watch'd, were so gallantly streaming". After being lambasted for her mistake on blogs and social networking sites, CONAN O BRIEN aired an edited clip of her performance in which jet pilots flew overhead and dropped bombs onto the singer, "That's a gutsy pilot to make that decision", joked the host. O'Brien's sidekick Andy Richter quipped that the bombs were actually for Aguilera's latest movie 'Burlesque' and had nothing to do with her Super Bowl mistake. TMZ.com have since obtained footage that appears to show Aguilera delivering a seamless performance of the patriotic anthem on Saturday (5th February 2011).
Despite her Super Bowl slip-up, Aguilera is set to perform at this week's Grammy Awards and some sources suggest she will open the show alongside Jennifer Hudson and several other mystery guests.