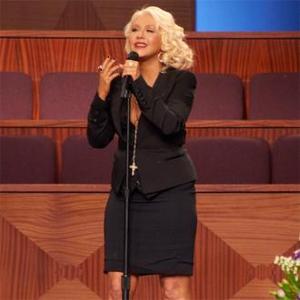 Christina Aguilera is working on a dance music comeback track.

The 'Genie in a Bottle' singer is preparing to make her comeback in August, with a song produced by Max Martin, who has previously written hits for Britney Spears, Kelly Clarkson and Katy Perry.

A source told Billboard.com that the unnamed track is based around the chorus line: ''All I want to do is what you wanted.'' Christina's last album, 'Bionic', was released in 2010 but was only a moderate success by the star's standards. However, she since she has contributed eight tracks to the soundtrack to the film 'Burlesque' - which she also starred in - and appeared on Maroon 5's huge single 'Moves Like Jagger' last year.

Christina - who is also a mentor on reality show 'The Voice' in the US - has previously told of her plans to release new music before the end of 2012.

She said: ''I've been in the studio, hard at work. Different producers I'm working with have just excited me so much and have given me amazing tracks and beats and material I've been writing to.

''It's gonna come out later this year, and I'm very, very excited to share it with my fans, finally.''

Christina's 'The Voice' co-star Cee Lo Green has also been working on a track with her.

He said: ''It's a song for her album. I won't disclose the title, because it could possibly be a working title.

''We've talked about it amongst ourselves, and I'm gonna go in on it and work it out. It'll be the second song we've done.''