Christina Hendricks' mobile phone has been hacked and several photos of the 'Mad Men' star have been stolen. 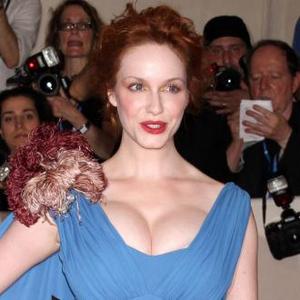 Christina Hendricks has contacted authorities after her mobile phone was hacked.

The 'Mad Men' star was left furious after discovering a hacker had bypassed the security settings on her handset and downloaded several images, including shots in which the busty redhead is scantily clad and not wearing make-up.

An alleged topless photograph of the 36-year-old actress appeared along with other shots on website Motherless.com on Sunday (04.03.12) but her representative has denied it is Christina in the pic.

The representative did confirm the hack to GossipCop.com, saying: ''Christina's phone was in fact hacked and photos were stolen. The proper authorities have been contacted in hopes of rectifying this situation. The topless image is fake and not an image of Christina.''

Police are now investigating the matter.

The hacking of Christina's phone follows pictures of Olivia Munn hitting the internet which were allegedly stolen from her phone.

The images were published yesterday and the shots apparently show the 'Magic Mike' star in different states of undress, including wearing Pink lingerie, a black bra, a white bra and a low-cut v-neck.

There is also a nude shot which has been branded fake by the actress and her representatives.

Olivia, 31, took her twitter page to assure fans the naked shot was not her.

Accompanied by pictures of a baby and a cat, she posted a tweet which read: ''If you ever hacked my phone, these are the pictures you'd find.''