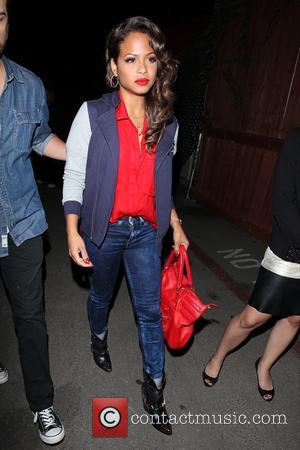 Paris' pal Christina Milian took to the floor next, going a year earlier and picking 2010. In another sobre choice, Milian stated that 2010 was her most memorable year because it was when she discovered her then partner and father to her child, record producer The Dream, was cheating on her with his assistant. Dancing the cha cha to Cee Lo Green's 'Forget You,' her "technique was on fire," as she also went on to score 28 points.

Jack Osbourne's year of choice was 2012; a mixed year that started good with the birth of his daughter, Pearl, and only weeks later became much harder when he was diagnosed with Multiple Sclerosis. Dedicating his waltz to his wife and child, Jack drew a rapturous round of applause from the audience and the judges, who each scored him a 9 for his efforts. It was "wonderful," said Bruno, "magical" said Carrie and "fabulous," said Len, and even though he had the lowest score at the point, he was in no danger of going home, meaning he could deservedly sit back and enjoy the rest of the show without worry.

Snooki chose 2012 as the most memorable year, but injected a dose of today into her performance as she danced to Britney Spear's new song, 'Work Bitch.' The Jersey Shore star chose 2012 as it was the year her son, Lorenzo, was born, a turning point in her life which she credited for turning her life around completely, as she dedicated the sexually charged house-pop tune to her son (a weird choice admittedly). Still, the judges were impressed enough to hand out another round of 9's, leaving her bottom of the pack but with a great points haul nonetheless.

Brant Daugherty went back the furtherest yet, but only to 2009, as he chose the year he first moved to Hollywood through his father's advice, who sadly died that same year. Although his tone was downbeat and his song choice, Elton John's 'Your Song,' was a quieter choice too, Brant wanted to remember his father in as upbeat a was as possible, delivering a fast-paced contemporary that celebrated his father's life. His efforts also drew another round of 9's from the judges, keeping the standards high again.

Amber Riley also chose 2009 as her most memorable year; the year she was snubbed by American Idol, but stumbled on the auditions for a little show called Glee. She and pro dancer Derek Hough performed a foxtrot that prompted high praise from Carrie and Bruno, who gave a 9 and a 10 respectively, but the routine wasn't good enough to entice Len into giving anymore than a 7. Despite her 10, Amber now sat at the bottom of the table.

Elizabeth Berkley chose 2012 as her most memorable year; the year that her son, Sky Cole Lauren was born. However she didn't chose the year as her 'official' year to dance to and instead opted for 1989, the year she was cast in Saved by the Bell. Jiving along to The Pointer Sister's 'I'm So Excited,' each judge commended her performance, but with only two 9's and an 8, she was now at the bottom of the list, but there was one more lady who could take away the unenviable position at the bottom. Could Leah Remini and Tony Dovolani hold on for another week?

Before Leah Remini could finish off the performances however, Bill Engvall had to dance a routine inspired by 1982; the year he married his wife (who was in the audience cheering him on throughout the performance). Dedicating his Viennese Waltz to his wife Gail, and with backing from Billy Joel's 'She's Always A Woman To Me,' Engvall's performance was good, but amazing. Scoring all 8's, it might not be out of line to think that his chances of winning the show are very slim.

Remini's most important year was this year, the year when the "stuff hit the fan" and she made one of her biggest life choices to date; leaving the controversial Church of Scientology. She and partner Tony Dovolani danced a contemporary number to Katy Perry's 'Roar' and although the concept behind the routine was good, as all of the judges agreed, the actual dance itself was a little off and her final score was a meagre 22, placing her bottom of the standings. But Leah's low score didn't necessarily mean she was on the way home, as it was up to the audience at home to decide this week's deportee.

It was down to either Elizabeth, Christina and Leah, with just about everyone expecting Leah to get the boot, but it was Christina Milian who was kicked off the show in the end, in a move that no one really saw coming. The boo's and jeers began immediately as her name was read out, as Christina told presenter Brooke Burke-Charvet that the decision was a "true shock" to her. It was to everyone else Christina! But as pro partner Mark Ballas noted, the "went out with a bang," and their time on the show won't be forgotten. Christina said, "It's been amazing. If you take a great challenge and risk, you become a better person." Christina Milian's axing came as a shock to all