Chrissy Teigen and John Legend have announced they are expecting their first child together after two years of marriage. 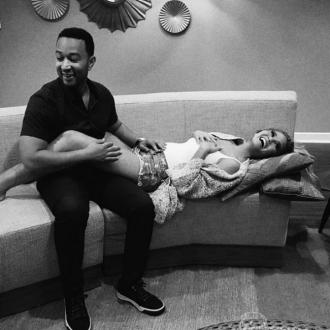 Chrissy Teigen and John Legend are expecting their first child together.

The couple - who tied the knot in 2013 - took to their social media accounts last night to reveal they're expecting their first child together after months of struggling to get pregnant.

Alongside a snap of John tenderly placing his hand on her tummy, Chrissy wrote on Instagram: ''John and I are so happy to announce that we are pregnant. As many of you know, we've been trying to have a baby for a while now. It hasn't been easy, but we kept trying because we can't wait to bring our first child into the world and grow our family. We're so excited that it's finally happening. Thank you for all your love and well wishes. I look forward to all the belly touching! Xx (sic)''

The 'All of Me' hitmaker and Sports Illustrated model's happy news comes shortly after Chrissy opened up about the heartbreak of not being able to conceive.

She said previously: ''John and I were having trouble. We would have had kids five, sic years ago if it had happened. But my gosh, it's been a process.''

And the 29-year-old beauty also admitted she and John, 36, want to have a big family.

She added: ''We want a lot of kids. I would love to have three or four of my own, and then adopt a few. So basically I'll be pregnant the rest of my life.''