In the Volvo viral commercial, which was unveiled last month (Nov13), the Bloodsport actor straddles two moving trucks, using the tips of his toes as suction pads for the impressive manoeuvre.

Now Norris has attempted to go one further by appearing to recreate the leg split on the wings of two planes, with his arms crossed, while he balances 11 suited men on his head, in the shape of a Christmas tree.

As the camera pans out, little lights on the men's suits twinkle as the planes soar above the clouds.

The video, titled Greetings from Chuck (The epic Christmas split), was made as a holiday greeting from staff at Hungarian animation firm Delov Digital and is set to Enya's Only Time - the same soundtrack used in the Volvo ad.

Norris isn't the only actor to spoof Van Damme - Channing Tatum attempted to copy the European martial arts icon on the set of his 21 Jump Street sequel. In an online video, Tatum stands atop two food trolleys as two assistants push them slowly apart, but the movie hunk falls off and ends up on the ground, holding his crotch in mock pain.

Anything You Can Do, Chuck Norris Can Do Better, (Including Jean-Claude Van Damme's Truck Stunt) 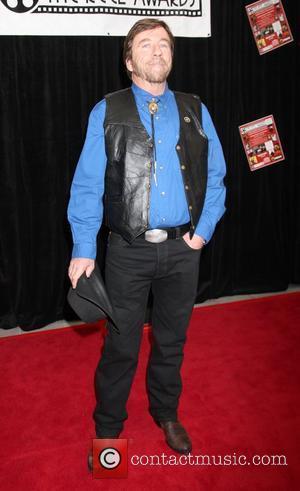 Biggest Meme Of Them All? Chuck Norris To Have Slovakian Bridge Named After Him

Chuck Norris To Have Slovakian Bridge Named After Him?