CHVRCHES Star Lauren Mayberry Has Urged Abusive Online Bullies To "Bring It On" After Calling Out One Rude Instagram.com User For Threatening Rape.

Picture: ChVrches - A variety of stars from the music industry were photographed as they arrived at the Brit Awards 2015 which were held at the...

The Scottish singer, who has become known for taking a stand against Internet misogyny, took to her social networking page on Wednesday (22Apr15) and shared a screen shot of one particularly graphic remark she had received online.

It read: "I want to push a cheesegrater into your p**sy and quickly pull it out so that I can enjoy raping you".

In the accompanying caption, Mayberry blasted the offender, writing, "My band is lucky enough to have some of the most awesome, supportive and respectful fans in the world and we are so excited to be in the studio making an album to share with them.

"Yet, on a daily basis, we still receive communications like this. These people never learn that violence against women is unacceptable. But they also never learn that women will not be shamed and silenced and made to disappear. I am not going anywhere. So bring it on, motherf**kers. Let's see who blinks first."

In the article, she revealed she was bombarded with "inappropriate" and "openly vile" comments on the band's social networking blogs after sharing another online user's offer of sex, and one even told her to "learn to deal with" the dirty responses if she wanted to remain relevant in the music industry.

She wrote, "Why should women 'deal' with this? I am incredibly lucky to be doing the job I am doing at the moment - and painfully aware of the fact that I would not be able to make music for a living without people on the Internet caring about our band. But does that mean that I need to accept that it's OK for people to make comments like this, because that's how women in my position are spoken to?

"Objectification, whatever its form, is not something anyone should have to 'just deal with'." 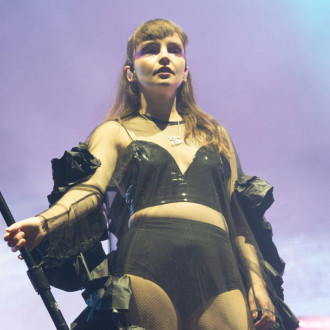