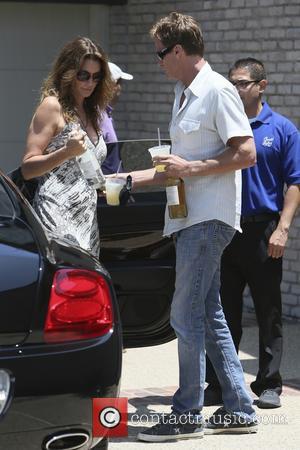 Cindy Crawford and her husband Rande Gerber have taken their children out of a top California high school over fears they are at risk of poisoning.

Presley Gerber, 15, and Kaia Gerber, 12, were supposed to start at Malibu High School this week (beg18Aug14) but the supermodel isn't allowing them to attend classes after learning routine soil tests found elevated levels of the toxicant polychlorinated biphenyl (Pcb) in the school's window caulking.

Officials are planning to remove the caulking from the affected classrooms and periodically monitor the air and dust, but Crawford insists that the measures being taken aren't good enough and she can't be certain that her children will be safe.

Crawford tells NBC correspondent Maria Shriver, "I don't feel 100 per cent safe... I'm very frustrated and I'm very disappointed at the way this has been handled. The problem, for me, is that they haven't tested the source... I think that air testing and water testing are a great piece of the puzzle. Unless they're testing every day, how do I know that every day it's safe for my kid?"

Pcb chemicals are linked to cancer and can cause skin conditions such as rashes and extreme acne. Production of Pcb was banned by the United States Congress in 1979.