Supermodel Cindy Crawford has revealed her wild side and confessed she loves to dance on tables at parties. 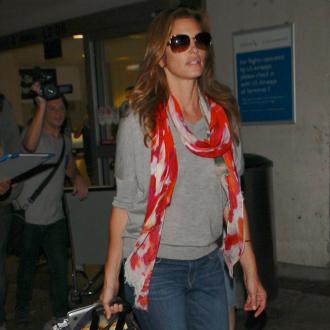 The 48-year-old supermodel - who has a 16-year-old son, Presley, with her husband Rande Gerber - has confessed she loves to let her hair loose and boogie on the furniture at parties.

According to the New York Post newspaper's Page Six column, the brunette beauty wishes she had picked up the habit sooner as she finds she ''jiggles'' more now than she did in her younger years.

She told Michigan Avenue magazine: ''I probably should have done it when I was 20 and things weren't jiggling so much.''

Cindy also showed off her wild side when she splashed a staggering $30,000 on a nude portrait at a recent party launching the artwork of Brian Bowen Smith.

The US-born beauty and her husband bought the fine-art photograph of naked women wearing horses' heads at Smith's first show at the De Re Gallery in Los Angeles, California earlier this week.

The debut collection, titled 'Wildlife', features nude women wearing animal masks, with the identity of each subject - who are said to be celebrities, actors and models - kept secret.

He is also the protégé of the late fashion photographer Herb Ritts, for whom Crawford posed for some of her most famous nude and fashion shots, most notably the famed 'Stephanie, Cindy, Christy, Tatjana, Naomi, Hollywood, 1989' feature for Rolling Stone magazine.