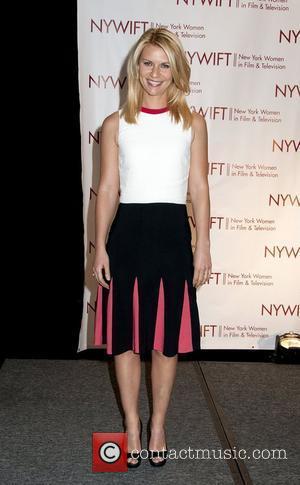 Acting couple Claire Danes and Hugh Dancy send each other photos of their feet when they're apart - so as not to bore each other talking about their daily activities.
The stars, who met on the set of Evening in 2007, have been married for two years but their busy work schedules often keep them separated.
Danes has been shooting her TV hit Homeland in North Carolina, while Dancy has been working on the New York stage - but the actress keeps the relationship interesting by sending her husband funny anecdotes and pictures.
She tells CNN broadcaster Piers Morgan, "In the formative stages of our courtship, our relationship, our schedules were amazingly compatible. Lately we've not been so lucky. I'm obviously filming the series and he's doing a play called the Venus In Fur in New York right now so he's stationed there.
"We talk a lot, we text a lot, we send each other photos of our toes - dumb stuff. I think it's dangerous when you go into reporting mode, when you just kind of list the things you've done that day. Sometimes you just kind of have to act as if you were with each other and not say anything terribly significant."
Danes admits she didn't expect love to blossom with the Brit when they met because she had just ended another romance and was looking forward to the single life.
She recalls, "I had just come out of a relationship and so I was very excited about being single, because I'd never been single and I was kind of boasting about it. And then I just fell in love, immediately, again! He's the best person I know, he's just great."