Claire Danes was paraded through the streets of Boston before being honoured with the Hasty Pudding Theatricals' 2012 Woman of the Year award at Harvard University yesterday (26.01.12). 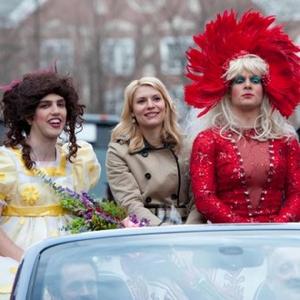 Claire Danes was honoured with the Hasty Pudding Theatricals' 2012 Woman of the Year award at Harvard University yesterday (26.01.12).

The 'Homeland' actress was paraded through the streets of Cambridge, Boston in an open-topped car flanked by two drag queens before proving herself worthy of the award by completing a series of tasks - -including a recital of a faux-Elizabethan monologue about genitals and a dance-off with a person dressed as a virus.

Claire - who was accompanied to the event at the prestigious university by her 'Martha Marcy May Marlene' actor husband Hugh Dancy - called the experience "wackadoodle" and "utterly trippy", before adding: "This is so contrary to what we associate with Harvard."

When accepting the traditional pudding pot award, Claire joked: "This is as empty as a Yale degree! You know you are outside the boundaries of Hollywood when a woman receives an award from which she can eat.