Actress Claire Danes Has Unveiled A Star On The Hollywood Walk Of Fame. 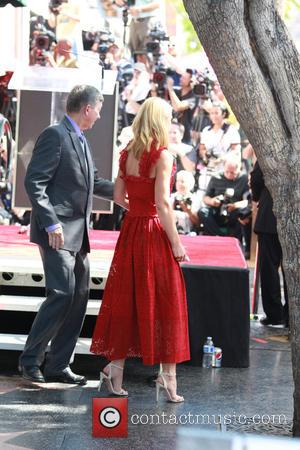 The Homeland regular was supported by her husband Hugh Dancy and her parents, Carla and Christopher, at the unveiling ceremony in Los Angeles on Thursday (24Sep15).

Alex Gansa, creator of the hit TV show, gave a speech at the event, praising his leading lady.

There was also a My So-Called Life reunion as former workers on the hit teen show gathered to support Claire.

"There's a small group of us here today that had the privilege and pleasure of knowing Claire at the very beginning of her career when we all worked together on My So-Called Life," Bess told the crowd, "She wasn't quite so glamorous back then. She wore sneakers and jeans and big baggy shirts, and she had this violently maroon hair. It was right before her 14th birthday.

"Even then she had the charisma of a star and the real depth and gravitas of an artist."

The glitzy ceremony marked a double celebration as it came just days after Claire and Hugh celebrated their sixth wedding anniversary.

Claire has previously cited Hugh as the love of her life, telling Harper's Bazaar, "I'm genuinely in love with him. And I like hard things. You know, marriage is hard, but I'm up for it... There's so much opportunity if you are interested in each other to go further. It's kind of a beautiful exercise... And life keeps it interesting for you. Like having a baby. The demands are different; that has been dictated by circumstance. So we haven't had to liven it up. Life just keeps livening it up for us."