Clapton Fox songs are written and sung by Robert Kaniepien, who appears to have a poet in him, when it comes to lyrics. The elegance and creativity of the words really stands out as beautiful. The record opens with; 'Ain't no Justice in the Sky I', with a grainy, radio-muffled sound, and deep, monotone vocal. The instrumental on the tracks is quite dominantly electric, and the sound is heavily technologically crafted. 'Scan Brown Mink' uses a distorted vocal for the entire track, and a very synthetic instrumental sound. 'Dear Dead Friends', despite the macabre title, has a surprisingly cheerful sound, and is very much split into two halves; a catchy, high-pitched backing rhythm, and a wistful but strong male vocal. 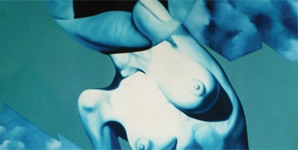 'Amazing Thunderstorm', the fourth and eponymous track, has a good, strong beat, which is appealing (and, quite frankly, funky), but it opens with a disturbing recording of a woman's incoherent crying, a woman clearly in distress, which is significantly unsettling. 'Procrastination', on the other hand, mixes a heavily electro sound, with an oddly incongruous acoustic guitar, and an almost Beach Boys or Monkees style melody. It feels like a mishmash, as though some musical dial is spinning through genres, and stopping to play one or two lines, then moving on to something else. In parts it sounds like The Coral, in parts it sounds like The Beatles, and then comes the odd Robert Smith whisper, sufficiently creepy. 'Twelve Pairs of Shoes', nearly at the end of the record, is joyfully celebratory; half modern-London-indie, half Blur-Oasis from the '90's.

On the most part, it works, but sometimes the absurdity gets away from the track a little bit, just for a few bars. Amongst so much of modern music that's replication and unoriginality, it's very refreshing to be woken up by something different, and this record is certainly unique.