Musical career: Club Smith released two EPs entitled 'The Loss' and 'The Process' in 2010, followed by debut single 'No Friend of Mine' the next year through Front Wall Records. Their next single, 'Call to Harm', was also released in 2011, through All Sorted Records to much acclaim. In 2012, Club Smith unveiled debut album 'Appetite for Chivalry', which was produced by Will Jackson and James Kenosha. Drummer Vijay Mistry was announced to have joined Kaiser Chiefs in 2013. Club Smith have toured with the likes of The Sunshine Underground, Mystery Jets, Two Door Cinema Club, The Pigeon Detectives, Kaiser Chiefs and Shed Seven.

Leeds trio Club Smith have unveiled an energetic but bizarre video for their new single 'The Green Room' due out on September 2nd 2013 through Tri-Tone/ PIASUK records. The track appeared on their debut album 'Appetite for Chivalry' released in 2012.

The video features a bunch of guys wearing hoods, ponchos and spray painted animal masks as they frolic about smashing up their guitars, skateboarding, cycling and starting bonfires, occasionally alongside a bored looking Siberian Husky. It's the perfect testament to youth and frivolity which is frequently hinted at in the catchy lyrics among the underlying confusion and desolation. The song has a driving drum beat with a rhythmic, crescendo like force behind it and an almost melancholy sentiment that makes it a brilliant track to round off the summer.

After releasing their debut album in 2012, Club Smith have far from drawn a line beneath it. They continue to reproduce the record with new mixes using a variety of producers - including Dave Bascombe (Depeche Mode, Goldfrapp, Tears For Fears) and Lance Thomas (Ladytron, Clinic) for the single mix - to keep their musical identity as ambiguous as ever. The track follows previous singles 'Beautiful & Useless', 'Lament' and 'No friend of Mine'.

By Katy Ratican in Music Reviews on 08 February 2010 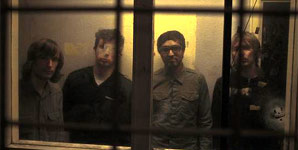