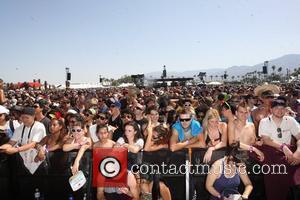 With the group recently announcing their return and new album Mosquito dropping right in between the two Coachella weekends, we’d be hugely surprised if Karen O and her New York punks weren’t on the bill.

Atoms For Peace video for 'Judge Jury And Executioner'

The Lumineers are blowing up. Though their self-titled debut album was released last April, they really gained momentum after being nominated for Best New Artist at this year’s Grammys, to the extent where you wouldn’t bet against them to take that. For a time their track ‘Hey Ho’ was the most played track on US Spotify, and all their forthcoming tour dates in the UK sold out within hours. They’re the new band every promoter will be wanting a piece of.

The Lumineers video for 'Ho Hey'

Why not? JT’s back with a new single and an album, and Coachella’s line-up is often diverse enough to take him some of the biggest pop stars in the game alongside more alternative acts. It might not be Timberlake’s usual style to play such an event, but in terms of getting himself back on the map, we couldn’t think of a much better place to start.

Done deal we reckon, look at those two handy free weekends in their Spring touring schedule. The Brooklyn band released Shields in 2012 and are still cracking on with the live tour of it into 2013. With both the weekend of April 12th and April 19th free, we can’t possibly imagine what they’ve kept them open for…

Grizzly Bear video for 'Yet Again'

And the long shot…

Yes Tony Visconti his producer said he had no plans to tour live, but he also said he could see him performing a one-off show; and it’s not like we were expecting him to return in the first place with a new album was it? Anything’s possible with Bowie, so watch this space…

David Bowie's 'Where Are We Now?' video

And the definitely not…

It’s just not happening, Morrissey’s mentioned in frequent interviews that the Coachella organisers have offered money galore for a Smiths get together, but the chances of the outspoken front man making up with his rhythm section seem remote to none. Plus he wants the whole place meat free.

Watch Morrissey's 'The Last Of The International Playboys'