These days it's rather easier to realise the truth, as Shakespeare long ago proclaimed, that the world is indeed your oyster. What's more, you no longer need a sword with which to plunder its riches; musical talent and inquisitive minds will do just as nicely. Having touched on some South American references with their first critically acclaimed album, 'Johannes', Cocos Lovers are back with more worldly wisdom awash with a wealth of rhythmic and tuneful hybrids containing some fabulously ingenious use of all that has come to influence their song writing. (If Andy Kershaw were looking for a band, or in fact a label, to define his early pioneering work in broadcasting he would surely not be disappointed to have chosen this 8 piece band from Deal.)

The bands new album 'Elephant Lands' is at times an involved composition of beautifully crafted songs. In the most part the tracks revolve around some great tales that are brim full with emotion and blood tied pain. There are well observed relationships and heart on your sleeve honesty played out through tender and rousing ballads that eschew some of the norms of the more bland folk from which they were ostensibly born. Having taken the chance to include influences and references from the far flung shores of the globe Cocos Lovers music has become a gorgeous blend of the warmly familiar and the interestingly exotic. (It's like sitting in your arm chair listening to the Today Programme whilst looking longingly at the Henry Rousseau above the mantlepiece). 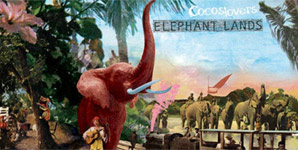 The fourteen track set is opened by its atmospheric title track, 'Elephant Lands'. As the deconstructed and ominous first chords gather around the elephantine trumpet a more mesmeric and whirring flute is waiting in the wings to whip up the tune, gradually building throughout with its skipping and jumping beats of snare drums and fiddle. Here, and elsewhere on the album, there are some great rhyming couplets to accompany the score ...."Oh run, run to the hills for the pigeons are circling, be warned they'll peck out your eyes. The old elephant lands, oh he sits on my breast bone and says to believe in Christ."

'Feral And Wild' sees the band in a more contemplative and reflective mood with the gentle layered harmonies combining superbly with the delicate violin and ukulele arrangement. 'Door To The Andes' continues the more sombre thread of melancholy tainted reminiscence ushered in by a paired back guitar and vocal intro. 'Fortuna' pleasantly adds to the personality of the album. The change of tack to a more rhythmic, tribal and heady mix creates a faintly Mediterranean feel with scents of sangria and salsa wafting around some far off and forbidden Balearic Isle. 'Love Is Not Like Roses', and later 'Lost Kids', are somewhat of a return to basics for the band (By comparison to much of the rest of the album) and as such they fail to rise to match its overall quality. You could argue editing over indulgence but that may counter creativity. On an album as vast and complex as Elephant Lands there has to be balance and perspective. The better the preceding song the more difficult the task is of appreciating the next, but that's not to say all shouldn't be aired.

'Blackened Shores' restores the parity with an introduction straight out of Captain Corelli and a finish swathed by a fusion of Soweto beats to create a jamboree that is joyously infectious. At track #8 Elephant Lands takes a distinct, and confident, further change. From 'Barcelona' on the album comes into its own with any timidity or uncertainty cast aside to reveal a more assured performance akin to that associated with their life sets...."All aboard who sails, high up in the rigging. Some men crawl and some men walk and all the women singing. Set sail into the east and dock in Barcelona." The beats break and build as the story unfolds whilst the words quicken as the the need to impart the tale intensifies. The high part of the album continues with the wonderful 'Bow And Arrow'. The layered harmonies are poured over the mele of interchanging instruments to create just the right balance between catchy and clever. A beautiful a cappella follows in the all too brief 'Days Are Long' before another more worldly experience ensues with the delightfully light 'Yellow'.

The three songs that close out Elephant Lands, 'Father', 'Anchor And The Moon' and the finally the eight minute epic 'Twilight' all carry a saddening sentiment that is both touching and provocative without being in anyway mawkish. How true, but how brutally frank it is, to be able to share even the smallest of presiding memories..."No virtue in words unsaid, you whispered 'Don't follow me'...........a boy that you barely knew......oh my days are gone without you, Father." You get a sense of slight resentment but at the same time an acceptance, maturity and mellowing that comes with age and that has been so well put to verse here. The group dynamic of interwoven relationships has clearly helped to craft the very emotive songs into a collection that can be shared and ultimately appreciated by the many that they will surely touch with their sincerity. The final dying moments are captured brilliantly by a very ghostly piano solo that you wish would just go on. Fab.


In Elephant Lands Cocos Lovers have shown diversity and composure, eloquence and emotion in abundance. They have managed to build on the successes of the first album and deliver a more mature, considered and assured album of remarkable complexity. The array of instruments used never ceases to amaze and beguile. From the dancing flutes to the see-sawing fiddles there is never a dull moment. Yes it's different to the live version of the band, and yes it does take longer to make the connection, but once its been made you'll not lose it and you'll appreciate the songs all the more for it. Although on first listen the album may feel slightly inhibited the intensity, intimacy and energy are all there. 'Elephant Lands' gives up something new upon each listen, and once you've heard it you'll not forget it! (Who needs Abbey Rd when you've got a caravan as a studio?)