Listen to the full album “Sound Mirrors” from Coldcut below!

Let’s just say it right at the start. In “Sound Mirrors” Coldcut have made the best album of their long and illustrious career. It’s not something you can state lightly, but there you are. Their production has never sounded better, their ideas have never been more various or interesting, they’ve never had such a great cast of guests and then integrated them into their sound so well. Yes, it’s a record that is deeper, funkier, cleverer, more engaged and more engaging than anything they’ve done before. And, it follows from that, it’s deeper, funkier and cleverer than just about anything else around right now.

The album opens with “Man In A Garage,” a tune which instantly gives a big clue as to what “Sound Mirrors” is all about – the combination of great song writing with contemporary production smarts. John Matthias give a beautiful, low key, folk-edged performance while Matt Black and Jon More hook up a rhythm that wouldn’t sound out of place on an Aaliyah record. The result is an aching, melancholy glitch-blues.

Next, “True Skool” crunches in. Featuring Roots Manuva on some post Bangles, instant pop dancehall classic business, this will echo round your cranium for months. The Rootical one, a man who has held the “Godfathers” in the greatest esteem since joining the Ninja/Big Dada camp back in ’98, drops a heavyweight performance, obviously revelling in Coldcut’s grasp of the interface between the classic and the bubblegum.

- - 7. Everything Is Under Control

Coldcut then take a moment to indulge their edgy-club-paranoid side, with the driving “Just For The Kick.” Lyrics are provided here by Annette Peacock, best known for her work on the leftfield jazz label ECM, but showing here a snarling poise perfectly suited to the weight of the music.

“Walk A Mile” features the legendary Robert Owens on an epic, building, hands in the air, push-up-ya-lighters tune that (whisper it) perhaps betters Coldcut’s legendary “Autumn Leaves”. It amply demonstrates the duo’s understanding of pop music but also its interface with rave’s euphoric sweep. Oh, and they even end up with a little Reichian serialism, in case anyone thinks they’ve sacrificed any of their musical vision’s reach.

From hereon in the album continues to broaden and deepen. “Mr Nichols” combines a beautifully subtle piece of music with a superb, deadpan piece of writing from Saul Williams. Former Ninja Andrew Broder aka Fog offers wonky, melancholy lyrics over a faltering kitchen sink orchestra backing on “Whistle And A Prayer”. Warm-up single “Everything Is Under Control,” with guests Jon Spencer (of “Blues Explosion” fame) and rapper Mike Ladd, revs up a chugging hip hop rock template that nods back to classics like “Beats & Pieces” while giving them a raucous, contemporary edge.

“Boogieman” continues the bogled-out theme established by “True Skool” but turns it into a stripped down, technoid classic, albeit one featuring the words of legendary Black American poet Amiri Baraka. On “Aid Dealer” sometime saxophonist and Mercury-nominee Soweto Kinch serves up a stinging lyrical attack on the aid industry before the tempo is pushed even further on “This Island Earth,” featuring the hotly-tipped Mpho Skeef.

Perfectly poised, “Colours The Soul,” with assistance from Dom Spitzer, takes the record toward its end with the kind of psychedelic maximalism that shows musicians absolutely confident in themselves and their abilities, a genuine track. “Sound Mirrors” offers a darker coda to the upbeat tone of “Colours…”, a swirling, semi-psychotic piece of instrumental music which sounds not unlike the London Philharmonic Orchestra being thrown through a wormhole.

At a time of intense musical conservatism it’s bracing to find a production team who are still willing to push and to keep pushing but who, in doing so, create inspired, accessible music that transcends genre. This is a record which shows once again that Coldcut acknowledge no boundaries and set themselves no limits and, that in doing so, they create timeless records for whoever is prepared to join them. A moment’s reflection should be enough for you to know that it’s time to listen. 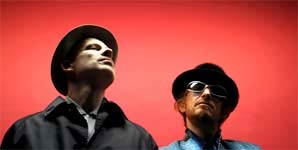