Review of Midnight Single by Coldplay

Whatever it was that we were expecting from Coldplay's upcoming album, it certainly wasn't this. The first single from 'Ghost Stories' entitled 'Magic' felt like standard Coldplay material with its gentle guitars, gritty rock vocals and memorable melody, but on the release of second single 'Midnight', all that seems to have been stripped right back. 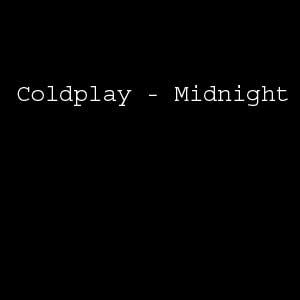 The surprise is immediate as it kicks off with a gently paced guitar and synth lull, and from then on we are taken on a totally unexpected ambient journey. It's not that we thought Coldplay couldn't do the dreamy, atmospheric thing, it's just that such minimal guitar use wasn't something we expected to experience as strings are kind of a Coldplay staple. Bringing further (pleasant) surprises was the addition of a vocoder in their instrument collection, which made Chris Martin's distinctive vocals feel echoed and effortlessly immersive.

Most of the song feels like an ever building crescendo, taking its time to add various new layers such as the mellow piano and more and more drawn-out vocals, altogether accumulating into this fantastic cinematic vibe before the synth and a measured rhythm takes over and turns it into more of a dance number.

'Midnight' feels a like a surreal trip and, judging by the accompanying video with its infrared and negative imagery, we're guessing it's sort of meant to. It's almost like a mix of Sigur Ros and Bon Iver, but it certainly doesn't feel like Coldplay being so markedly different from their previous work. It's inspiring to see such a successful band experimenting with their sound though, and bringing something so fresh to their musical catalogue. If anything is getting us excited for 'Ghost Stories', it's this.