Over a decade since the release of their debut studio album, Parachutes, Coldplay are undoubtedly one of the biggest bands in the world. When you reach the level that Coldplay have powered up to, there's huge interest in everything that you do; the rumour mill works overtime, the pressure to continue to deliver is immense and there's massive anticipation surrounding everything that you release. So, if you are going to churn out an album, you pretty much have to make certain it's a damn good one. After a nigh on three year wait for its completion, Mylo Xyloto has finally landed complete with whiffs of the past, leaps to the future and even a perhaps unlikely collaboration with Rihanna; it is to be hoped that it's a grower.

Definitely not lacking in ambition, Mylo Xlyoto opens with its title track; not so much a track but more 43 seconds of atmospheric guitars punctuated by twinkling glockenspiel in the vein of a pre-gig instrumental introduction of sorts. The track build to launch into 'Hurts Like Heaven', a confident, fast paced, up tempo track with driving drums powering the usual Coldplay mix of lead guitar melodies lilting over a blend of rhythm guitar and bass, with Chris Martin's vocals in from the off; then, with their most recent pre-album single, 'Paradise', Coldplay step outside of their comfort zone and into and electro-flavoured new territory. 'Paradise' opens with a minute long string-laden introduction, but when the beat eventually kicks in, it really does kick in with an almost dub step swagger; the track has much more of a commercial leaning to it than anything by Coldplay that has preceded and almost verges on club territory with its swaggering chorus. Coming out of the chorus, 'Paradise' is again characterised by a catchy 'ooh' hook reminiscent of 'Viva La Vida', before the track plays into a much calmer piano and vocal intro. 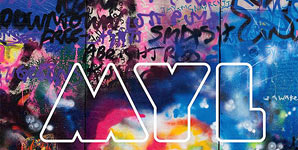 Another of this summers' festival previewed tracks, 'Charlie Brown', then sounds a strange introduction before crescendoing to crash into a driving guitar riff with the pounding strength that we all know and love from Coldplay. The inclusion of the acoustic guitar amongst the blend is something that harks back to their early days but the powerful electric guitar riffs emphasise Coldplay's ambitious sound. Much like earlier tracks such as 'Politik' from A Rush Of Blood To The Head, 'Charlie Brown' pushes forward with much energy and determination before dropping back to a contrasting delicate and tranquil piano outro. This leads quite smoothly into 'Us Against The World' with its' gentle paced introduction of undulating picked electric guitar before it hits into a strummed acoustic guitar accompanied 6/8 ballad that again harks back to the Parachutes days; a more stripped down and simple sound when compared to the charge and swagger of preceding tracks. Like on many of Coldplay's newer offerings, drummer Will Champion provides backing vocals and the track gradually builds in layers from the recurrence of the gentle undulating picked electric guitar part to a layer of piano that really thickens the sound, before dying out to nothingness.

'M.M.I.X' is another noodling experimental electronic interjection which segues into previous single 'Every Teardrop Is A Waterfall' who's synth introduction sounds an instant confidence which is all the more emphasised when the lead electric guitar melody and then pounding beat kick in and the track builds infectiously with a swaggering anthemic quality. 'Major Minus' then offers a sound that's different again with strummed acoustic guitars underpinned by a foreboding booming bass which then kicks into roaring busy, borderline frantic chorus led by electric guitar lines and a distorted bite. Down-tempo ballad 'UFO' sounds acoustic guitar and vocals later accompanied by warm atmospheric strings; it's calmness, warmth and feeling, together with its' unplugged nature completely contrasts the heavily produced and electronic tracks on the album, again harking back to their early days amongst a selection of largely forward looking tracks. This is followed by the much anticipated collaboration with Rihanna, 'Princess Of China', which opens with an anxious blend of synths and guitars and then the R&B type beat kicks in; Coldplay it ain't, and is instead frankly a bit of a rambling song that reaches its' strongest point when Rihanna herself takes lead in the chorus.

The closing section of the album continues to offer the same inconsistency that flavours the entirety of Mylo Xyloto; 'Up In Flames' opens with a slow and steady, strong booming bass drum and snare beat then joined by the distinctive piano and vocal combination of Chris Martin occasionally joined by hints of slushy strings and deepened by a bass guitar line and later gentle electric guitar suggestions. Following another rhythmic intermission, 'A Hopeful Transmission', 'Don't Let It Break Your Heart' then struts forward with a determined pound right from the off. Coldplay's fifth finally concludes with 'Up With The Birds' which opens stripped back with a sparse piano part lilting beneath Chris Martin's gentle vocals then joined by strings and soaring atmospheric electric guitars; it's quite a spacey and free vibe to begin with until the strummed acoustic guitars push the track forward more rhythmically before fading out to a delicate toy piano outro.

There are rumours that Mylo Xyloto is to be Coldplay's last, in which case they've certainly not saved the best 'til last; it's an experiment of an album that perhaps offers something for everybody but not really everything for anybody, instead getting lost in its own inconsistency, maybe self indulgence, and only sitting comfortably with perseverance.