Chris Martin Was Once Kicked Out Of Coldplay 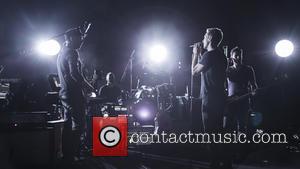 Coldplay frontman Chris Martin was once kicked out of the band because the scrutiny of his relationship with actress Gwyneth Paltrow made the group lose its way.

The singer was given the boot for a short period after the release of the British band's third album X&Y in 2005 because he was becoming more famous for his high-profile relationship than he was for making music.

Martin admits producer Brian Eno gave him the push to help his bandmates, telling Radio 1 DJ Zane Lowe, "There was a time (when Eno) kicked me out of the band for a few weeks to get everybody else's confidence up. At that time I could be quite strong minded, so he taught us a bit more flexibility and to let everybody get to the end of their idea before judgement is passed... I was famous for tabloid stuff... we had lost our way a bit."

Martin and Paltrow announced their separation in March (14) after ten years of marriage.