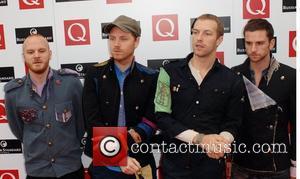 Coldplay are planning to follow in the footsteps of Oasis and Robbie Williams by playing a huge show at Knebworth House.

The Gallaghers played two shows at the stately home in 1996 before Robbie Williams bettered their attendance record in 2003 by attracting an estimated 375,000 people over three nights.

Speaking on BBC Radio 1, Coldplay frontman Chris Martin revealed that his chart-topping band are attempting to book a date at the Hertfordshire site.

"We're trying to book a place that rhymes with Blebworth," he told Zane Lowe.

"We realised there's a lot of people who don't like us in Britain but, you know, they don't have to come."

However, Martin explained Coldplay are only likely to play one show, rather than attempting to beat Robbie Williams' three-show run.

"We're not gonna do three [nights], Robbie did three," he said.

"We'd be happy with one. Then the next day can be some kind of caravan conference."

Martin was appearing on the Kiwi DJ's evening programme to premiere the band's collaboration with rap star Jay-Z.

The Roc-A-Fella mogul has contributed a verse to Lost+, a remix of Coldplay's Lost!, from Viva La Vida or Death And All His Friends.

Lost+ appears on the download of the Lost! single and on Coldplay's forthcoming Prospekt's March EP.

"That's the first time I've ever enjoyed a Coldplay song," joked Martin after Lost+ was played.