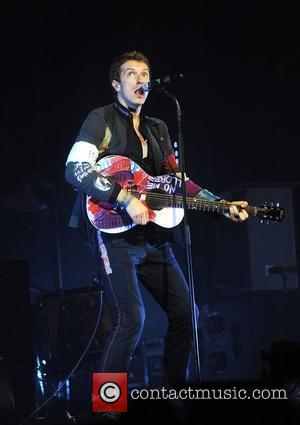 Rockers Coldplay have stepped back into the studio to record new music - without frontman Chris Martin. The Yellow hitmakers have booted out their singer on the advice of Brian Eno, who worked with the fourpiece on their hugely successful 2008 offering Viva la Vida or Death and All His Friends.
The legendary music producer wrote a letter to the group suggesting they kick out Martin in a bid to focus on honing their sound without his input.
But the star put his spare time to good use - by taking to the airwaves on the U.K.'s Absolute Radio and playing his first ever solo set on Friday (30Jan09).
Martin explained during the radio show, "He (Eno) said that he still wanted to work with us on the next album but that I was banned from the studio.
"He said that it would be better without me for the first two weeks: 'You can do better without the singer!'"
But the rocker is convinced his temporary dismissal will benefit the band: "It has turned out to be a good idea - because the band has been free to try out loads of weird things without me getting in the way."