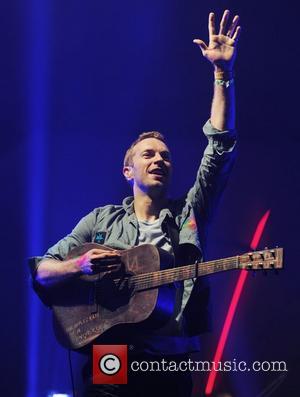 Coldplay tackled Rihanna's latest dance hit 'We Found Love' during their appearance on Bbc Radio 1's Live Lounge this week. The British rockers, who released new album Mylo Xyloto on Monday (24th October 2011), wowed with a unique version of the track, despite a few hiccups, reports MTV news.
Lead singer Chris Martin lent his customary haunting vocals effortlessly, while the group played on the song's melancholy lyrics about wanting to fall in love despite knowing it won't be for long. The performance would have been flawless had it not been for Martin giggling at the very beginning. Although Rihanna has been told about the cover, she is yet to listen, telling Twitter followers, "I can't wait to watch/hear it" The rockers have a strong relationship with the Barbadian beauty, who appears on the heart-breaking 'Princess of China' on their new record. Explaining the importance of her appearance on Mylo Xyloto, singer Martin said, "Her bit on our record is my favorite bit. ... When the song came out, it sort of asked for her to be on it. And I think at this point, we have nothing to lose, and so we've been trying some new things."
We Found Love, produced by dance mogul Calvin Harris, is the first single to be taken from Rihanna's forthcoming album 'Talk That Talk', which hits shelves on 21st November 2011.