Firth Dedicates Walk Of Fame Star To His Wife 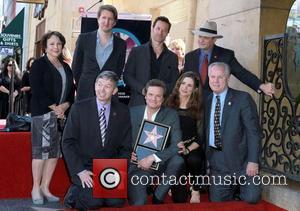 Colin Firth fought back tears on Thursday (13Jan11) as he dedicated his Hollywood Walk of Fame honour to his wife LIVIA.
The actor, who is tipped to win an Oscar for his portrayal of King George VI in The King's Speech, was saluted with the 2,429th star on the famous Los Angeles strip during a ceremony outside British pub The Pig & Whistle.
Firth became emotional as he received the honour and told the crowd that Livia's support has proved invaluable since he found fame.
He said, "When I look down there at that star, it's her name I see.
"I want to thank everybody that has accompanied me on this extraordinary journey, but probably more than anybody I could ever imagine Livia, who has walked every step of this with me joyfully and truthfully."
Firth later lightened the mood by cracking a joke about his Walk of Fame induction, adding, "I have a feeling I'm going to be here when I'm about 93 under a pile of blankets asking for spare change and trying to convince anyone that will listen that I'm the guy whose name is on the sidewalk - failing to recognise that the old lady next to me is in fact Emma Thompson."