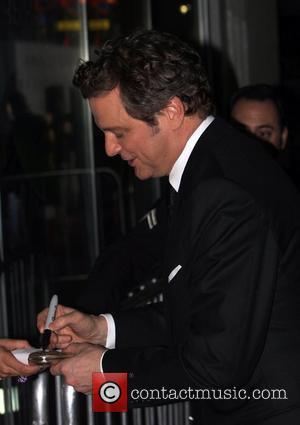 Colin Firth will have no problems showing his two young children his new film THE KING'S SPEECH - even though his royal character uses the 'F' word in the movie.
The actor campaigned for a better rating for the film after British censors slapped a '15' certificate on the movie, banning anyone under 15 from seeing it at cinemas.
Firth's fuss was successful and the film board officials agreed to drop the rating to a '12A', after agreeing the offending expletive in the movie was not used aggressively or aimed at anyone.
The actor says, "We won the battle in Britain big time. As far as I know it was precedent. There didn't seem to be much argument about it and now there's a warning on the poster saying, 'This contains strong language in a speech therapy context.'"
But Firth, who plays stuttering royal King George VI in the film, accepts that some parents might be put off by the idea of swearing in a film - even if it is in a scene where a therapist is trying to cure a stammer: "I understand this isn't a non-issue. I get that people don't want their small children hearing these words. I don't like them.
"But one of the things that the British film board said was it was the fact that it wasn't used in a violent context or directed at anybody and it was not in a sexual context. These forbidden words have become momentary tools in the movie to get a guy to break out of extreme repression. It couldn't be a more harmless context. It doesn't teach kids to sprinkle their language with these words or direct them against people.
"I would hate to deny kids in that age bracket from 13 to 18 to discourage them from seeing a film that has so much to say to people that age.
"As a father of small children, the context I would like to keep them away from is when it (the 'f' word) is casually used. I find that almost as disturbing. I love football and I take them but I have to wrestle with myself because what they hear there would make a sailor blush.
"I don't relish those words or my children hearing them, so I'm not judging people who don't like the words... But, in the film, it isn't used in a vicious, sexual way."