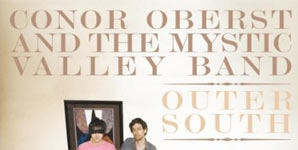 Outer South is the second solo album from prolific song writer Conor Oberst, better known as Bright Eyes, following his first release last summer. The Mystic Valley Band have served as Oberst's backing band on both albums and are made up of Nik Fritas, Taylor Hollingsworth and Jason Boesel, who also share song writing and vocal duties on a couple of tracks.

Oberst has a song writing credits list as long as Michael Jordans left arm, and often the albums he churns out seem to have a lot of fillers. Not overtly terrible tracks, but tracks that seem to be merely 'American Music' tracks and it has to be said 'Outer South' contains several of these, or possibly its due it to having a collection of fifteen tracks. However, every track of Oberst's are a story in themselves and do not necessarily need to be a catchy, foot tapping classic. There will be people out there who dislike 'Outer South', but Oberst and Bright Eyes fans alike will no doubt hold this album as a prize addition to their collection.

Mixed reviews were received around the first album, which incidentally, The Mystic Valley Band did not receive a credit for but were definitely there. It has to be said, that the guys deserve credit; the band provide excellent support to Oberst's stronger vocals, which usually waver with a feeling nervousness.

Some of the highlights include 'Big Black Nothing' which has a Bob Dylan feel, 'Difference Is Time' is a mellow number where vocals are provided by the Valley Band so may not be a fans favourite, and 'White Shoes', is a bare stripped back vocals and acoustic track with simple yet beautiful lyrics.

As always Conor's album is worth listening to, it may take several listens for the Oberst-uneducated out there, but this album will stand the test of time.