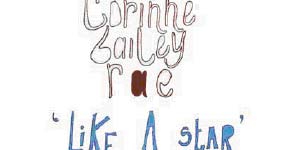 Corinne Bailey Rae must be doing something right. Since this EP was mailed out just a few weeks ago the media reaction has been incredible. For a debut, low-key introduction to an artist, 'Like A Star' has burst onto the radio like a ray of sunshine through a dusty window. Record of the Week on Radio 1 daytime shows for two successive weeks now, playlisted on Radio 2 and Capital and heavy rotation on 1Xtra are just the tip of the iceberg. And with a jaw-droppingly special performance on last week's 'Later With Jools' on BBC2 that made everyone stop in their tracks, Corinne is already being hailed by many critics as one of the discoveries for 2006!

This limited-edition EP is a mere taster for Corinne's debut album which will be released in the spring. The variety and breadth of songwriting on display is as disarming as it is engaging. Of the tracks on this EP, the up-close-and-personal revelatory detail of 'Like A Star' has already pulled on many heart-strings; 'Enchantment' is a beautiful, dreamy piece of wistful drama calling to mind the more laidback moments of BjÃ¶rk or Massive Attack, while 'Choux Pastry Heart' is a languid, piano-led affair that showcases the unique beauty of Corinne's voice.

At a time when music can seem like so much product, the arrival of such an inspiring talent could not be more timely. As Music Week claim of this EP - "A sublime folk-soul fusion from one of the best voices we've heard in a long time. One of the UK's most exciting new talents."

'Like A Star' is released on November 7th on EMI Records / Good Groove.

Corinne Bailey Rae - Been To...