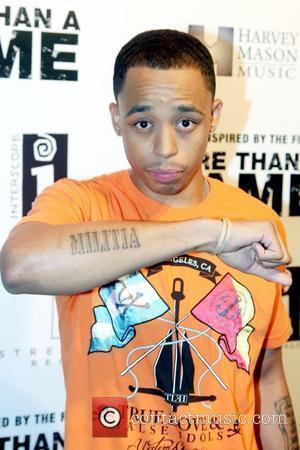 Rapper Cory Gunz has been arrested on a weapons charge after cops allegedly discovered him in possession of a loaded firearm.
The hip-hop star, real name Peter Pankey, Jr., was detained by officers on Saturday afternoon (28Jan12) when they allegedly found the pistol in his backpack.
Gunz, who has collaborated with Rihanna and Lil Wayne, is being held at Central Booking in New York's Bronx district, reports MTV News.
His father Peter has spoken out since his arrest, saying, "At the end of the day, there's a reason for everything, but at the same time, in New York, it's mandatory jail time. To go to a precinct and see your son, your junior, in handcuffs, it's heartbreaking. Any time you see your child in jail, in the cell, in handcuffs, it's very hard.
"He's walked down some of the same paths that I walked down, but you never want to see your kids go through what you went through. This is Cory's first offence, but sometimes they like to make an example out of rappers and people with any kind of celebrity to them."
He faces up to three and a half years in jail for illegal possession of a loaded weapon if found guilty.