The 49 year-old actress disappointed 'Friends' fans on Monday after confirming that the co-stars of the sitcom are not reuniting on screen for a 10th anniversary of the last episode. 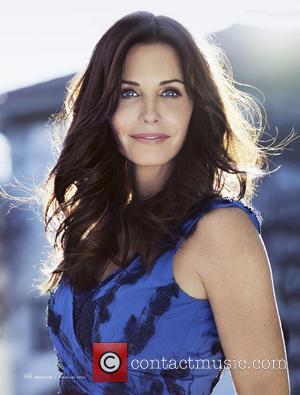 Picture: Courteney Cox - Courteney Cox opens up about her divorce from David Arquette in the February 2014 cover story of 'More' magazine - Monday 27th...

Courteney Cox and the rest of the 'Friends' cast have been asked the same question for the past ten years.

Will there ever be a 'Friends' reunion?

Well, according to Cox, who played 'Monica Geller' on the beloved sitcom, the answer is no.

The 49 year-old actress appeared on 'The Late-Show' on Monday night (April 21st) and spoke candidly with David Letterman on why the stars of the NBC show will not reunite.

"You're sick of the question, aren't you?" Letterman asked Cox, who currently stars in the ABC sitcom 'Cougar Town.'

"Only because once you say, 'Well, I'd like it,' then they have to contact every other cast member and be like, 'Courteney's into it!' And then I get in trouble," Courteney explained.

And then came the bad news as she adamantly stated, "It's not gonna happen."

The 'Scream' actress revealed one of the main reasons is due to the difficulty in getting all six co-stars together at once, and admitted she can't even get them all to reunite for a cast dinner.

"Let me tell you something: there's six friends and I've been trying to put together a cast dinner for 10 years. It doesn't happen," she explained. "I can get the girls to come, maybe Matthew Perry. Matt LeBlanc canceled last time right at the last minute, Schwimmer lives here (in New York City,) so it's just not gonna happen."

MORE: Why We Definitely Don't Need A 'Friends' Reunion

Cox then questioned Letterman on how a 'Friends' movie would even work. "We did the whole show on a soundstage in Monica's apartment," she said. "So what are you gonna do?"

These comments were echoed last year by fellow co-star Lisa Kudrow (Phoebe) as she was forced to speak out against the idea of a 'Friends' movie, denying that there was ever such a thing in the works. "Well, I knew there wasn't ever a movie. There was never a Friends movie. Ever. So I've always known it's not happening," she explained.