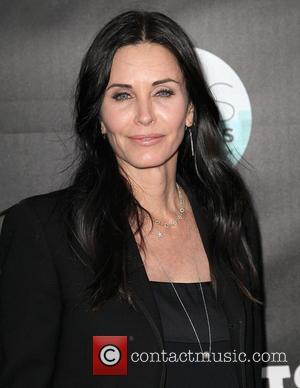 Unlike most ended marriages, Cox's and Arquette's relationship is still intact is fairly strong as they remain very close friends.

So close in fact, that the 'Friends' star announced he will be having a baby boy with new partner Christina McLarty.

Courteney told Ellen, "They're going to have a baby boy. I hope I'm allowed to say that."

The host then questioned the 'Cougar Town' actress on if her and Arquette's daughter, Coco, is excited by the news.

"Yeah, she's really excited," Cox said, referring to her becoming a big sister. "At first she was nervous, because, you know, it's a big deal. At first, I was nervous, I was like whoa, heavy. Now it's great and we actually all had dinner the other night, the whole family."

Having dinner with your ex and his new girlfirend may sound weird to some folk but Cox admits, "It's a very unique relationship. All of us like literally me, and Christina and David and Coco. It's great though."

News first broke about McLarty's pregnancy back in November (2013) and a source close to David said at the time, "it came as a surprise. They are excited and happy even though this was unexpected."

The 'Scream' actor met his new 'Entertainment Tonight' correspondent beau since the summer of 2011, they briefly split in mid-2012 due to apparent long distance issues but quickly reconciled.

Watch hghlights of Courteney Cox's interview with Ellen below