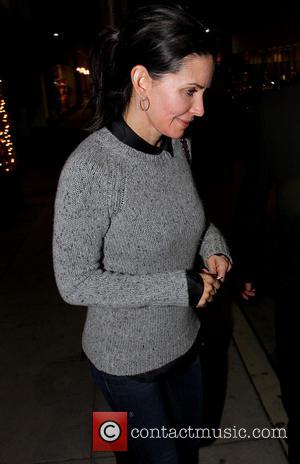 Courteney Cox's career has kept a fairly steady trajectory since the end of Friends, in which she played super-clean chef, Monica. She now stars in Cougar Town, a comedy about middle aged women going after younger men. Last year, however, she and her husband of 13 years, David Arquette, got divorced, having split two years before. Now, to publicise the newest series of Cougar Town, she's headed to the Ellen studio to have a chat with Ellen DeGeneres.

Of course, to play a cougar, she still has to look smoking hot, and she's doing pretty well. No one would ever guess she's 48. However, speaking to Ellen to revealed a couple of her top beauty secrets. Firstly, describing her hands as looking like an old woman's, she said that she gets them Fraxel lasered. Fraxel lasering essentially restores the skin's surface making it look a lot younger. Most people use it for their face, but Cox goes one step further, pampering her mitts.

Plus, she has her eyelashes Latisse treated. As you get older your eyelashes get shorter and thinner, Latisse helps them grow thick and long. They do look pretty good so obviously it's doing its job.

Both treatments are pretty pricey, so we just recommend some decent hand moisturiser and decent mascara.

Anyway, Cox's full interview with Ellen will be aired today. She also discusses peeing on her balcony to help her dogs out, and her relationship with David Arquette.