'Cougar Town' star Courteney Cox claims she will bare her breasts on the new season of the show. 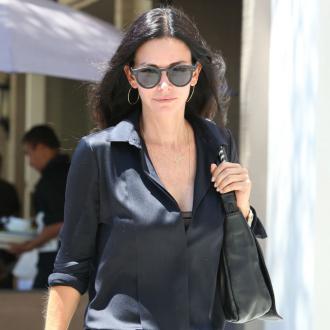 Courteney Cox has joked she will flash her breasts on the latest season of 'Cougar Town'.

The 48-year-old actress' show will move from ABC to TBS when it returns to US screens this month and Courteney says moving to a cable network will allow her to have more nudity on the comedy.

She quipped: ''You will not see one scene that I don't show my boobs.

''You know what? I'm getting older, so I've decided at this point I'm taking less focus [on] the face, and more [on my breasts. By the time I'm much older, I will just be absolutely nude. I think it's [going to] work for me, I hope.''

He joked: ''There is one difference [with the show going to cable. I think I'm allowed to say ... Courteney did declare this the year of her cleavage.''

Courteney has been single since splitting with husband David Arquette in October 2010 -and her sitcom co-stars have previously revealed they want to help her find a new man.

When asked who he would pick for Courteney to date, co-star Brian van Holt pointed at Dan Byrd and joked: ''She loves this man right here, she likes the cerebral hunk type.''

Another 'Cougar Town' star, Busy Philipps, said she thinks the former 'Friends' actress needs someone who can coax her out to party.

She said: ''A couple of people have asked me who I would set Courteney up with.

''I think she is a homebody and if Courteney had her way she would never leave her house, so she does need a partner who will bring her out and just tell her she has no choice and, make her go out into the world.

''She prefers everyone to come to her beautiful house, and by the way if my house was as good as hers I'd never want to leave it.''