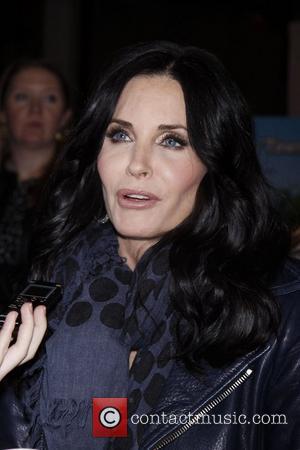 Courteney Cox has spoken of how she and Cougar Town creator Bill Lawrence are ready to change the name of their award-winning show. The show began following Cox's character Jules as she romanced younger men in her neighbourhood, but there was little of that in Season 2 and it's unlikely to return for Season 3.
After nine months away, Cougar Town returns on ABC tonight (February 14, 2012) and both Lawrence and Cox have been speaking to Usa Today about the need to change things a little. The creator said, "We gave the show a title that helped it sell the show and get it on, but then we didn't write that show.And so now we're a show called Cougar Town that's not about older women chasing younger guys. It's really a show that's about adult friendship and how people while away the time, essentially drinking with their friends". Cox agreed, saying, "We tried to figure out what would be a better name that would all of a sudden make people want to watch the show?...And what name is worth changing it for?". The pair say they have debated over possible new titles, with popular suggestions including 'Wine Time', 'The Sunshine State' and 'Family Jules', but no change of title will come into play until at least Season 4.
Meanwhile, Cox quietly joined Twitter two weeks ago and has so-far amassed over 100,000 followers. Speaking of the micro-blogging site, she said, "It's a whole new thing for me.I don't know how all this stuff works. It's nice to be able to let the fans know that you're around and say hi".