Courtney Thorne-Smith decided to have a low-key wedding the second time around after she appeared on the cover of America's InStyle magazine in a bridal gown just days after announcing her divorce in 2001. The former Ally Mcbeal star married first husband ANDREW CONRAD in June 2000, with the couple announcing their divorce just six months later in January 2001, just as the lavish photo spread from their nuptials was hitting newsstands. The 39-year-old tied the knot for the second time with digital marketing company owner ROGER FISHMAN on New Year's Day (01JAN07) and was determined to keep the event intimate. She says, "It was just us, our two dogs, two friends and the rabbi. (The dogs) were our groomsmen. I'm not crazy about weddings, so we thought we'd just do it ourselves. The ACCORDING TO JIM star was so casual about planning the event, she didn't even know what she was wearing until the last minute. She adds, "The day before we were supposed to get married I was having coffee with my girlfriends and I said, 'I think I'm going to wear a dress' and they were like, 'Honey, it's too late!' "I said, 'No, I think I'm going to wander over to this boutique.' The boutique next door (to the coffee shop) found my dress the day before. Dress, shoes, necklace, everything - it was perfect!" 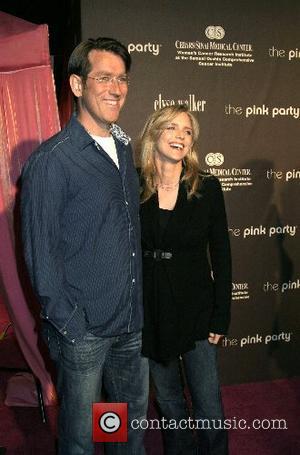