Review of Faith In The Future Album by Craig Finn

Craig Finn's second solo album, 'Faith In The Future' (released on Brooklyn-based indie label Partisan), is the best evidence yet that the 44-year-old could write the great American novel of the 21st Century if he set his mind to it. That's how compelling the vignettes and characters he presents are. They're elevated out of the mundane lives they inhabit by Finn's turn of phrase and keen eye for detail. Like Springsteen and Dylan before him, Finn uses his creations to highlight wider social themes without sounding like he's preaching from on high. With that in mind, this isn't a forgettable solo outing, rather Finn flexing his narrative muscles in a different direction. 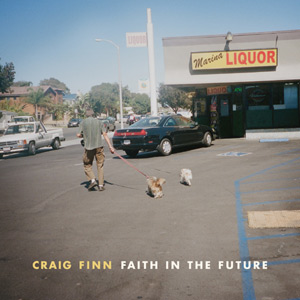 Without the grandiose instrumentation required for a full band like The Hold Steady, Finn's compositions seem more intimate, but never pedestrian here. There's no rush to get to the big choruses and these ten songs are certainly less eclectic than his previous solo record, 2012's 'Clear Heart Full Eyes'. While many of these songs may feel like they have a more sombre undertone than The Hold Steady, there are still moments where organs and brass add a layer of joy to Finn's distinctive and melancholy guitars. Mix in the occasional backing singer for a chorus and you've got a sonically satisfying and not entirely predictable album.

But, really, with lyrics this good, there's little need for anything musically challenging to accompany them. Take penultimate track 'Christine' for example, where Finn hooks you with the opening lines: "She went to Memphis with some dentist, that she met on some weird website. She came back three days later, she couldn't speak for a week". If that doesn't make you want to hear the next three minutes of the song to find out what happened, then I'd be surprised. That lyric alone tells you there's sadness, mystery, heartbreak, and a touch of black humour in what's to come. That's certainly an achievement for the opening bars of any track. Unsurprisingly, many of these songs have a similar moment where a line grabs your attention and pulls you into the narrative. Perhaps the most disturbing is the aborted phone call from an ex-lover on 'Sarah, Calling From A Hotel'. The closure given in the rest of the conversation is abruptly disturbed by the chorus; "The last thing she said to me before she hung up the phone was "here he comes, oh god, I gotta go. Here he comes, he's got a gun"." It plays like a scene from a short film or a chapter from a novel, Finn's writing seems to use the structure of his songs to build tension and real empathy with his characters.

All of this, of course, sounds very highbrow; it's not. In fact, the lives detailed here are about as blue collar as you can get. There's real dirt under the fingernails of the protagonists and while there are occasional religious undertones of crucifixion and redemption, these are among the most real and compelling of Finn's creations to date.

Finn sings; "all your tiny particles add up to something beautiful", on 'Roman Guitars'. In a similar way these ten songs create a picture of modern America that is surprisingly hopeful as each track contains a recurring theme of overcoming adversity and moving confidently into the future. Yes, there may be fewer sing-along, high-octane moments than Finn's work with The Hold Steady, but I'd still rate 'Faith In The Future' amongst his best work to date.