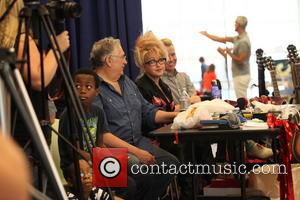 The In Da Club hitmaker has come under fire a number of times for making anti-gay comments, including a bust-up with celebrity blogger Perez Hilton in 2010, when he tweeted, "Perez Hilton called me d**che bag so I had my homie shoot up a gay wedding. Wasn't his but still made me feel better."

Now he is hoping to make amends by joining the singer's fourth annual Cyndi Lauper & Friends: Home For The Holidays charity show, an event which supports her True Colors Fund that works to address the problem of Lgbt youth homelessness.

Also taking to the stage are Dixie Chicks star Natalie Maines, Patty Griffin, Salt-N-Pepa, and Sufjan Stevens among others.

The star-studded concert will be held on 6 December (14) at New York City's Beacon Theatre and co-hosted by Lauper and Rosie O'Donnell.