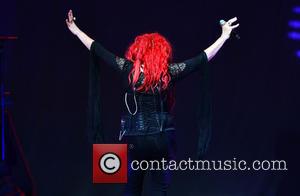 Cyndi Lauper's third annual charity concert in New York got off to a painful start on Saturday (07Dec13) when singer Pink battled through sound problems as she kicked off the fundraiser.

The So What hitmaker decided to pay tribute to the veteran pop star by performing an acoustic version of Lauper's classic Time After Time at the Beacon Theatre bash, but the set was marred by loud feedback noise.

The issues prompted Pink to plead with audio technicians, "Stop, please make it stop, it's making my head angry."

The problems were quickly fixed, allowing fans to enjoy an early Christmas celebration, with Swedish rockers The Hives teaming up with Lauper for a rendition of Christmas Duel, while she returned to the stage for four more collaborations, including a cover of John Lennon's Imagine with Josh Groban, and festive favourite Home for the Holidays with Nelly Furtado, according to The Hollywood Reporter.

The quirky singer closed the Cyndi Lauper & Friends: Home for the Holidays show by spreading a little more seasonal cheer with Feels Like Christmas, and her own hits Girls Just Want to Have Fun and True Colors.

The concert, which also featured appearances from Susan Sarandon and Rosie O'Donnell, was held to benefit homeless youths in the lesbian, gay, bisexual and transgender (Lgbt) community.

Pink wasn't the only singer to suffer sound problems over the weekend - Selena Gomez stormed off stage after severe microphone difficulties disrupted her performance at the Jingle Ball concert in Los Angeles on Friday night (06Dec13).