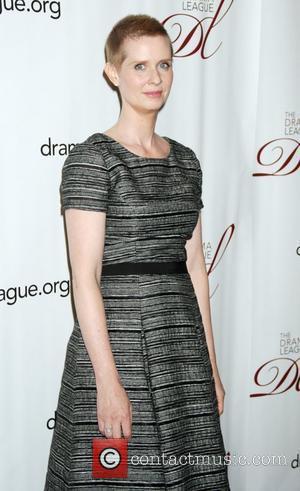 Sex and the City actress Cynthia Nixon, 46, has married her girlfriend Christine Marinoni, 45, in New York, People magazine revealed today (May 28, 2012). The couple got engaged three years ago, at a rally to support same sex marriages. At the time of their engagements, same sex betrothals were still illegal in the state of New York.
Cynthia and Christine decided to wait until it was legal for them to marry in New York, and Cynthia said in 2010 "I'm enjoying being engaged very much. I don't mind a long engagement, which this one is surely turning out to be." Last summer, New York laws were changed, to enable same sex marriages. Nixon's PR representative told People "On May 27, 2012, Cynthia Nixon and her girlfriend, Christine Marinoni, were legally married in the state of New York. Nixon wore a custom dress by Carolina Herrera." No other details of the wedding are currently available. Cynthia has two children from a previous relationship with the photographer Danny Mozes. In February 2011, Marinoni gave birth to their son, Max Ellington Nixon-Marinoni.
Cynthia Nixon recently added her public support to Amnesty International's plea for women's rights in Afghanistan. She was joined by Patrick Stewart and Meryl Streep in backing an open letter written by the charity to US President Barack Obama and Afghan President Hamid Karzai, to urge that the rights of female Afghans are not lost when international military retreat from the country.