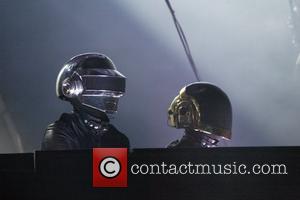 Who wants to know what Daft Punk look like without their helmets on? Not many of you probably because there have been plenty of pictures of the French duo in the past without their robot head gear on. We mean, do you really think that they wear those things 24 hours a day 7 days week? Think of the smell that would build up? We presume they sweat like any other human being.

Nevertheless, in what apparently constitutes as news, it would appear that the electro icons have been pictures – again – without their hats on. Electronic music duo The Knocks were, um, knocking about with Guy-Manuel de Homem-Christo and Thomas Bangalter at the office of their record label, Columbia, and they took a picture of the pair enjoying some down time and playing beer pong. Great craic. However, they realised that Daft Punk have kind of made it their ‘thing’ to only be photo’d wearing their robot headgear and so swiftly deleted the pic from Twitter where they’d posted it, and commented "GUESS WE WEREN'T SUPPOSED TO POST THAT PIC :X"

Unfortunately for them someone had saved the image and now Gawker have posted it which means that it might as well be on big billboards all over the place really. So what do they look like then? Two pretty normal French dudes of course. What did you expect?

This is what Daft Punk normally look like in public Daft Punk hanging out in a pyramid, as is their wont