What We Learnt At The Golden Globes: Damian Lewis Was Very, Very, Drunk 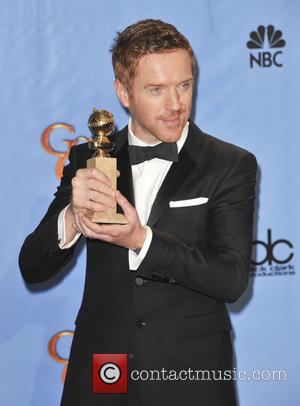 After winning the coveted Golden Globe for Best Actor in a TV Drama, British star Damian Lewis well and truly let his hair down. The 41-year-old reportedly gave a step-perfect rendition of the Gangnam Style dance with his on-screen son, the actor Jackson Pace, before getting very, very drunk.

The Homeland stars wowed onlookers with the impromptu performance (though we reckon they had the whole thing planned). Unsurprisingly, the world's media were keen to chat with Lewis, given his big win at the Globes. He beat the likes of Bryan Cranston, Jeff Daniels, Jon Hamm and Steve Buscemi in the night's closest-to-call category by far and made sure he got through plenty of the free champagne on offer. Lewis apparently had to turn down an interview with E! reporter Marc Malkin because of the sheer amount of alcohol he'd consumed! Marc Malkin tweeted: "Damien Lewis no interviews because "I'm too drunk to talk!" Love honesty!" (sic)"

It was an all-round great night for Homeland, which scooped Best TV Drama as well as Best Actress for Claire Danes. The series - based on an Israeli series called Hatufim - wrapped up its second season in December. It follows a psychologically troubled CIA agent who believes that a U.S. Marine - played by Lewis - has been turned by Al Qaeda after eight years in captivity.