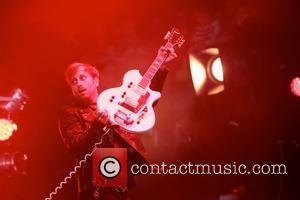 The couple tied the knot at the guitarist's home in Nashville, Tennessee on Saturday (19Sep15), according to TMZ.com.

A photograph from the ceremony shows Auerbach and his bride kissing underneath a ceremonial arch as members of the wedding party cheer them on.

The rocker and his partner confirmed the engagement rumours and announced they were expecting their first child together in February (15), but the bride did not to be appear to be pregnant on her wedding day.

Auerbach was previously married to Stephanie Gonis, who he divorced in August, 2013. He has a six-year-old daughter, Sadie, from that union.

The wedding news comes after Auerbach scheduled U.S. tour dates with his side project the Arcs, following the release of the album Yours, Dreamily. The band will hit the road in Europe in November (15), as previously announced, before hitting North American venues in December (15).

It appears the couple's honeymoon will be in New York as the Arcs have a gig lined up at the Bowery Ballroom on Saturday (26Sep15). The show will be livestreamed on Yahoo Music.