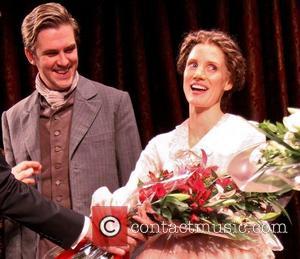 Picture: Dan Stevens and Jessica Chastain on stage during the Broadway opening night curtain call for The Heiress at the Walter Kerr Theatre New York City,...

It seems a paradox to describe anything as both 'dreary' and 'dramatic' but as the reviews roll in for the highly anticipated Christmas special of the much loved period drama, Downton Abbey, that's precisely as its being described.

Despite the Daily Mail reporting that the show "failed to draw in a big audience", it still managed over 7 million viewers, playing 6th most watched show of the big day (Metro). Nevertheless, it appears the millions of viewers weren't entirely impressed with the slow plot. According to the tweets that the Mail published, it was "the most boring episode of Downton Abbey EVER" while another described it as the "worst programme ever".

However, out of 7 million people there's bound to be a mixture of opinion, and although some found the episode boring, many others were simply left distraught at the death of central character Matthew Crawley. As the Metro reports, other viewers claimed that the show was "killing my soul", "shattered my heart", while another said "I AM 100% DONE WITH THIS SHOW. I CAN'T BREATHE." So, despite the mixed reviews, it seems very few of them were positive.

Show producers assured fans, however, that the death of Matthew was the only way to continue the show without the man who plays him, Dan Stevens. Stevens had opted out of the contract for a fourth season to pursue other ventures, and is currently starring in The Heiress on Broadway, NY. An ITV spokeswoman said that the most credible way of continuing the story without Stevens was to kill off Crawley. "There is a strange sense of liberation at the same time as great sadness [when leaving Downton Abbey] because I am very, very fond of the show and always will be," Stevens said.