Dancing With The Stars Parings: Bristol Palin Gets Mark Ballas! 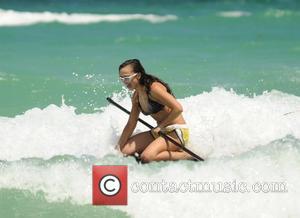 Picture: 'Dancing With The Stars' Karina Smirnoff seen on a paddle board during a holiday in Miami Beach Miami, Florida - 20.07.12

After months of waiting, the pairings for Dancing With The Stars' forthcoming season have been finalized. As many will know by now, the new season is a special 'all-star' instalment, meaning, former winners of the show have been invited back to compete for the title of champion-of-champions.

On Monday morning (August 13, 2012), ABC revealed the professional-celebrity teams, strangely giving five contestants an advantage by announcing repeat partnerships. Season three winner Emmitt Smith will once again dance with Cheryl Burke, while Kirstie Alley will once again strike up her successful partnership with Maksim Chmerkovskiy. Bristol Palin - who surprisingly made it through to the final of season eleven - will team up with Mark Ballas, whom many consider to be one of the most accomplished dancers on the show. So it looks as though the new couplings have it all to do, and they include Kelly Monaco with Val Chmerkovskiy, Shawn Johnson with Derek Hough and Apolo Anton Ohno with Karina Smirnoff.

Viewers still have the chance to bring back one more contestant for the new season of Dancing with the Stars 2012, with Sabrina Bryan, Kyle Massey or Carson Kressley all up for the public vote. The result will be announced on Good Morning America on August 27, 2012.