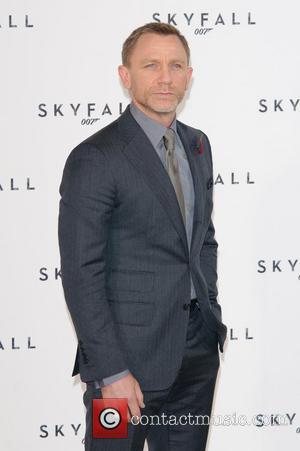 Daniel Craig has taken a swipe at one of America's most high profile families, the Kardashians, calling the reality TV clan "idiots". In his first interview addressing his secret marriage to Rachel Weisz, the James Bond star blasted celebrities who live their lives in the spotlight.
Speaking to GQ magazine, Craig, 38, cites Kim Kardashian and company as an example of the type of lifestyle he refuses to live by. Both he and Weisz have remained tight lipped about their sensational marriage, which saw the actress leave fiance Darren Aronofsky, but Daniel explains he has no plans to dish on the specifics, saying, "Look at the Kardashians, they're worth millions. Millions! You see that and you think, What, you mean all I have to do is behave like a f*cking idiot on television and then you'll pay me millions?". When pushed on life with Rachel, Craig reluctantly explained, "I'm in love and I'm happy. That is as far as I'm prepared to go. Life is long, life goes wrong, and I don't want to say something now that might be thrown back later. Ultimately, people are saying, 'Give it six months'. Well, guess what? I'm not responding". Things certainly went wrong for Kim Kardashian, whose marriage to Nba star Kris Humphries lasted just 72 days before she filed for divorce in California.
Craig recently completed work on David Fincher's American remake of 'The Girl with the Dragon Tattoo' and is currently shooting the 23rd Bond movie 'Skyfall', set for release in October 2012.