Daniel Craig To Open Olympics As 007?

Daniel Craig has reportedly been asked to open the 2012 London Olympic Games as James Bond by the Queen. 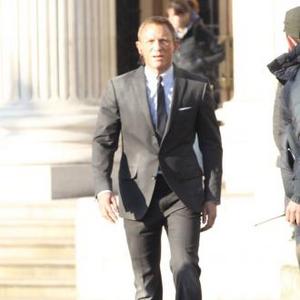 Daniel Craig will open the 2012 London Olympics as James Bond.

The Queen has reportedly asked the 44-year-old 007 actor and 'Trainspotting' director Danny Boyle to shoot a short film to launch the event in July.

The pair even earned themselves an invite to Buckingham Palace to shoot scenes in which the British spy hero is given his latest mission to open The Games.

According to The Sun newspaper, the monarch may even make a cameo appearance before the action moves on to the Olympic stadium in Stratford, east London - which Daniel parachutes into after jumping out of a helicopter.

A source said: ''It's a huge coup for BBC producers and Danny to be allowed into the palace and have the Queen involved.

''They wanted the most iconic British film character inside the building most associated with London and with the monarch - and they got it.

''It will be a magical scene for all watching at home and inside the stadium on July 27.

''Working out the logistics of filming has taken months and hasn't been easy -- but it will be worth it in the end.''

A spokesman for the palace - which is gearing up for the Queen's Diamond Jubilee in June to mark her 60th year on The Throne - said: ''Buckingham Palace is involved in a number of filming projects during this special Jubilee year and we would not go into details of any particular project until nearer the time of transmission.''

Meanwhile, the James Bond franchise reaches its own milestone this year, having been on the big screen for 50 years.