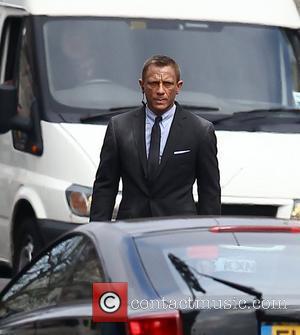 Daniel Craig stars in a short James Bond film, directed by Danny Boyle, which will be shown during the Bbc's opening coverage of the London Olympics 2012. Craig will don his 007 tuxedo for the skit titled 'The Arrival', which sees Bond summoned to Buckingham Palace to be informed that his latest mission is to open the Olympic Games.
According to the UK's Sun newspaper, Bond is then shown being taken by helicopter to the Olympic stadium in Stratford, where he parachutes into the arena (though it's not clear whether he will appear for real on the night). The Queen personally sanctioned the film and gave Boyle and Craig access to the palace and its private rooms last week. A source revealed, "It's a huge coup for Bbc producers and Danny to be allowed into the palace and have the Queen involved. They wanted the most iconic British film character inside the building most associated with London and with the monarch - and they got it". The news comes in a week when anticipation for the new Bond movie 'Skyfall' began to build. The Advertising Age website reports that Craig will ditch his usual "shaken not stirred" martini for a beer in one scene in the new movie, following a deal with Heineken.
The movie, directed by Sam Mendes, is Craig's third outing as the secret agent and follows 2006's Casino Royale and 2008's Quantum of Solace. Spanish actor Javier Bardem plays one of the villains, while French actress Berenice Marlohe is set to play the enigmatic Bond girl Severine.