The latest trailer for 'Spectre' sees Daniel Craig's James Bond fire up his classic flamethrower during a car chase. 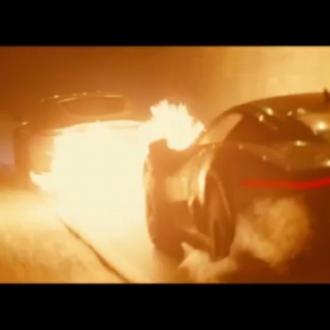 The first official TV spot for the highly anticipated new film has been revealed and sees Bond - who is being played by Craig for the fourth time - pull out all the stops as he fires up the rear flamethrowers on his Aston Martin DB10.

The beginning of the clip is similar to that of the teaser trailer for them film, however, Bond can then be seen climbing into the bespoke two-door coupe - which was designed especially for the film by the luxury car manufacturers - before all hell breaks loose.

Although the fictional secret service agent's cars have always been fitted out with the latest gadgets and weapons, the classic flamethrower hasn't been used for quite some time.

In the 1973 film 'Live and Let Die' Roger Moore's Bond uses a makeshift flamethrower to kill a poisonous snake in his hotel room while Craig's bond can be seen unleashing the weapon during a car chase in 'Spectre'.

Meanwhile, towards the end of the latest trailer the spy can be seen embracing new Bond girl Monica Belluci while Ben Whishaw's Q looks in a state of panic.

In addition to Craig and Whishaw reprising their roles, Ralph Fiennes will be returning as M while Rory Kinnear is set to play Chief of Staff Bill Tanner for the third time.

Other stars set to appear in the 24th Bond film - which is being directed by Sam Mendes - are Christoph Waltz, Andrew Scott and 'Guardians of the Galaxy' actor Dave Bautista.