Keeping Queen Elizabeth's role in the Olympic Games Opening Ceremony, where she appeared to jump out of a helicopter, a secret was ''a hell of a job''. 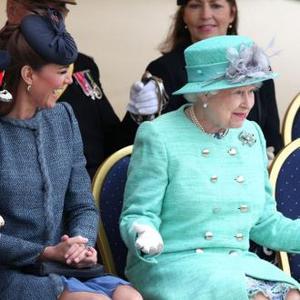 Keeping Queen Elizabeth's role in the Olympic Games Opening Ceremony a secret was ''a hell of a job''.

The monarch delighted those attending the ceremony at the Olympic Stadium in Stratford, East London and an estimated worldwide audience of one billion by taking part in a pre-recorded segment with Daniel Craig as James Bond where she appeared to Parachute into the stadium.

Scenes were filmed in April and a source told MailOnline: ''It's been a hell of a job keeping it secret for so long.''

A palace spokesman said: ''She was delighted to be asked to be involved in something so exceptional.''

The film began with James Bond arriving at Buckingham Palace in an iconic black cab and walking down a hallway flanked by two of the 85-year-old royal's beloved Corgi dogs, Monty, 13, who used to belong to the Queen Mother and Holly, nine.

He entered a room to be greeted by Queen Elizabeth, wearing a pale peach dress, with the words ''Good evening Mr. Bond.''

The spy returned the formal greeting by answering ''Good evening You Majesty'' before the pair walked outside to a waiting helicopter before taking off, leaving the disappointed Corgis behind.

Queen Elizabeth and Bond travelled in the Union Jack decorated helicopter past a number of iconic London sights including Tower Bridge, Westminster Abbey and the London Eye before arriving at the Olympic Stadium for her ''jump''.

However, the royal revealed the joke when she and her husband Prince Philip appeared to loud cheers, where they walked down the Steps in the stadium to their seats.